Ashlynn Ella is a gentle girl with a connection to nature, she cares deeply for the forest and all its creatures. Unlike most future heroines, Ashlynn has an after school job on her mother's insistence that she learns how to work hard. She has a part-time job as a clerk at The Glass Slipper shoe store. Ashlynn originally sided with the Royals, but became a Rebel to be with her boyfriend Hunter Huntsman, as she herself announced in True Hearts Day Part 3.

Ashlynn Ella is a kind, pure, hardworking and sensible girl who isn't afraid to speak her mind when she sees that things are wrong. She has a mild addiction for shoes, a trait Apple White implies comes from her mother. Ashlynn barely takes anything for granted. She is in a relationship with Hunter Huntsman, a fellow animal-lover.

Ashlynn has bright green eyes and long, wavy strawberry blonde hair which she wears in a half-up bun on the top of her head.

As each Ever After High student has their own fairytale-represented name, Ashlynn's name is slightly misinterpreted. Ash, having similarities with Cinder from Cinderella's name, is called Ash. Lynn being the extra part of her name, rhyming with "Cin". "Lynn" can also be an individual name but fixed together with "Ash", punning the name of "Ashley" or "Ashlyn".

Ashlynn Ella's setting is her family home, Cinderella Castle. The main part of the castle is made of cream bricks and the roofs have teal tiles. It is located on the top of a high hill, reached by a very long staircase. However, this was changed to an Escalator so Cinderella would never lose a shoe again.

Ashlynn is the daughter of Cinderella and Prince Charming from the story Cinderella. The Evil Step-Librarians are her stepaunts, one being her Auntie Step, and other being her future Wicked Stepmother, and also the mother of her two Stepsisters, Charlotte and Prudence. Cinderella has a "pre-destined early death" (and Ashlynn has to marry a prince), meaning that she will die somehow after Ashlynn's graduation, when her story starts.

Ashlynn is best friends with Apple White and Briar Beauty. Ashlynn and Apple have been friends forever after, but after Apple found out about Ashlynn's out-of-story romance with Hunter Huntsman their friendship broke down, due to Apple's disapproval. Ashlynn's friendship with Apple meant so much to her that she was willing to break up with Hunter because of the pressure. After Apple learned about this she told Ashlynn that she wanted her to be happy even if that went against her beliefs in destiny and Ashlynn and Hunter were reunited.

Ashlynn is close friends with her roommate Briar, they often hang-out and are always there for each other. In "Thronecoming", Briar confided in Ashlynn about her doubts regarding her destiny and Ashlynn in turn told Briar about her worries over her relationship with Hunter.

In "Epic Winter". Ashlynn says that Crystal Winter is one of her longest best friends, the two have known each other since Spellementary school.

Ashlynn also gets along well with Poppy O'Hair, C.A. Cupid, Justine Dancer, Blondie Lockes and Hunter's best friend Dexter Charming. Poppy and Ashlynn often grab a Hocus Latte together between their shifts in Village of Book End. In "Chosen With Care", Ashlynn asked Cupid to come with her to the Blue Moon Forest Festival because Cupid was sad about Dexter taking Raven Queen on a date. Ashlynn is often seen hanging-out with Justine, Blondie and Dexter and always seems happy to help them out.

Ashlynn is currently in a relationship with Hunter Huntsman and loves him dearly. They got together at the start of the school year when then ran into each other in the Enchanted Forest, and bonded over their similar interests such as their love for animals and nature. As dating someone who is not part of your destiny is against the rules, they kept their relationship a secret from everyone until Cedar Wood found out in "Cedar Wood Would Love to Lie." Cedar agreed to keep their secret and no-one else knew until Duchess Swan discovered Ashlynn and Hunter having a romantic picnic together in "True Hearts Day Part 1", and they made their relationship public when she threatened to expose them. Because Hunter was a Rebel and not part of Ashlynn's destiny, many students were against the couple and Ashlynn finally cracked under the pressure and broke things off with Hunter in "True Hearts Day Part 2". But after hearing Cupid's speech at the True Hearts Day dance in "True Hearts Day Part 3", Ashlynn told Hunter that she wanted him to be her prince charming and that she was willing to become a Rebel to be with him. They got back together and started dating again. In "Thronecoming", Ashlynn did say to Briar: "I mean I already signed the book. But who knows what's gonna happen to Hunter and me." So she obviously still worries about their futures.

She has a phoenix called Sandella that she got on Legacy Year.

Ashlynn, unlike most of the princesses in Ever After, can speak to the animals and communicate with them. Since she's extremely kind to them, they tend to help Ashlynn with her work in the Village of Book End.

Ashlynn wears a small pink hairband with a pink bird and pink leaves over her braid hairband. She wears dangling heart-shaped earrings, and dangling on it is a golden glass slipper. She wears a golden necklace. Ashlynn wears a V-shaped top with puffy translucent sleeves. The first pair of puffy sleeves being pink, the others being blue. The V on her top is lined with golden fabric. Underneath, she wears a top which contains flower patterns. She wears two layers of skirt. The top layer being translucent and the bottom matching her top. Ashlynn wears glass slippers with vines coiled around her knees. Ashlynn accessorizes with a small bracelet with golden boots and shoes on it.

Ashlynn's hair in Legacy Day resembles Holly O'Hair's. She wears a Cinderella-themed gown that is pink and turquoise. Small flowers are stitched on her turquoise top. Ashlynn has dark pink puffy sleeves and turquoise layers on the skirt of her gown. She accessorizes with a large bronze crown with bronze leaves on it and a necklace with the same color. She also has a bracelet which resembles bronze shoes and a curling leaf bracelet on her other arm. She carries a camellia pink clutch with bronze leaves on it.

Through the Woods Art 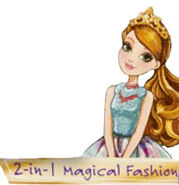 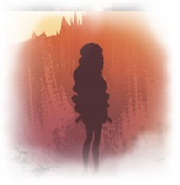 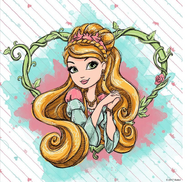 A forest pixie speaks to Ashlynn. 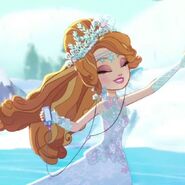 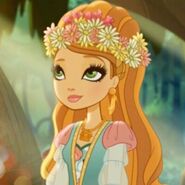