Baba Yaga teaches Home Evil-nomics at Ever After High and is also a faculty adviser there. Baba Yaga is also Raven Queen's adviser. She lives in a cottage that walks around the school grounds on chicken legs. It is a 'round, thatch-roofed cottage lurking in a stone courtyard' as described in 'The Storybook of Legends'. Baba Yaga sits crossed legged on a stool that appears to hover slightly above the floor. In 'The Storybook of Legends' she is an old sorceress who disapproves of Apple being a blonde and wants Raven to be evil.

Baba Yaga is quite grumpy, a bit strict and likes evil. She is a level 38 Sorceress and can speak Cursed Gibberish like The Evil Queen. She has an unusual punishment method when misbehaving takes place, she sprays Raven Queen with a water spray bottle when Raven talks about choice, as she does to her cat when it climbs onto her potions table.

The name 'Baba Yaga' comes from Slavic folklore. A supernatural being who flies around in a mortar carrying a pestle. 'Baba' means specifically 'old woman'. Yaga appears in Slavic languages referring to such words as 'horror', 'evil', 'anger' and 'witch'.

Baba Yaga has a niece who is a singer and is called Lady Yaga.

Baba Yaga wears a pale blue, round necked, long sleeved top with darker blue rolled cuffs, a black waistcoat with what appears to be a fur trim embellished with gemstones, a purple and dark blue patterned skirt and a patched brown wrap around her waist. She wears necklaces, bracelets and rings along with hooped earrings that have gems. Her hair is usually covered up by a hood. 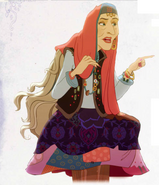 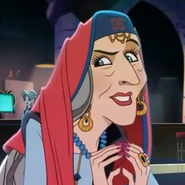 Baba Yaga up to something