Badwolf is the father of Cerise Hood and Ramona Badwolf and a Professor at Ever After High where he teaches General Villainy in the cauldron room, which is down, down, down in the dungeon level. He can transform between wolf and human form. His wife, Red Riding Hood, lives near the Dark Forest at the edge of the village of Hood Hollow, in a house that she and Badwolf built. Badwolf and Red Riding Hood were married in Wonderland by the Mad Hatter. Their marriage is forbidden in the village of Hood Hollow where they live at the edge and near the Dark Forest close to a wishing well so Badwolf can visit home without notice.

Badwolf is caring towards his family but he appears to be a strict teacher and intimidating to most. He snarls when he is angry or startled, which is where Cerise gets the same tendency from. He acts very formally with Cerise at school in front of others but is caring and gentle when no one sees them.

Badwolf has yellow eyes when he shows his wolf side, otherwise they are light brown. He has wolf ears. He has quite thick brown hair and a brown beard with white streaks running through both and visible long upper jaw cuspids (fangs). He wears a black opened neck shirt with a red scarf loosely tied under the collar. Badwolf also wears a fawn jacket with a beige fur collar. It is not known what other attire he wears at this point.

Badwolf is married to Red Riding Hood and their daughters are Cerise Hood and Ramona Badwolf. His wife calls him 'Baddy' and he doesn't appear to have any other names other than Mr Badwolf. 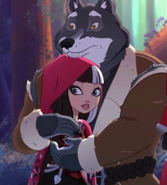 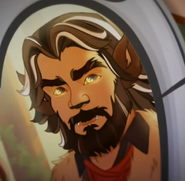 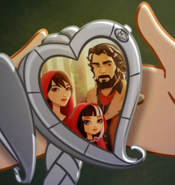 Cerise Hood and her parents 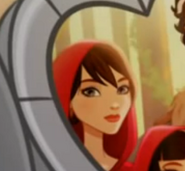 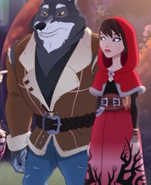 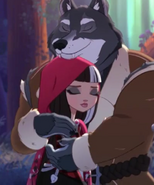 Badwolf with her daughters Cerise and Ramona.
Community content is available under CC-BY-SA unless otherwise noted.
Advertisement