“Running shoes! Those bears will never catch me now! Thanks, mom.”
―Blondie Lockes in Thronecoming

Blondie Lockes plays a large role at the school of Ever After High by being its main MirrorCast host. She has a show called "Just Right", which most of the students seem to enjoy watching. Despite her destiny, Blondie finds bears extremely adorable, this may have a negative effect on her story as she is going to have to be chased out of a house by bears. Blondie claims not everyone knows the whole truth about her story, including the fact that her mother is fairytale royalty. Although this causes her some insecurities about her destiny, she still sides with the Royals.

Blondie is something of a perfectionist, always trying to make everything "just right". She is Ever After High's authority on gossip and the go-to-girl for news. She does tend to exaggerate and stretch the truth at times, which she likes to see as a perfect quality for a journalist. Although she never wants to stop reporting, Blondie is aware that her gossip can hurt her friends, and she is genuinely sorry when it does. This shows a more caring side to Blondie.

Blondie has bright blue eyes and long, curly yellow-blonde hair with a fringe/bangs. Blondie prides herself on having such fair hair, "evidence" of her being royalty.

As each Ever After High student has their own fairytale-represented name, Blondie's name means blonde, but adding flair to it. Just like her mother, she was named after the color of her hair. Her mother's hair was described golden, and Blondie's described blonde.

Blondie Lockes' setting is the village where she grew up.

Blondie is the daughter of Goldilocks from the story The Three Bears. It is unknown who her father is.

Blondie shares a simple and friendly relationship with Apple. Blondie shows exceeding support towards Apple in the Destiny Conflict and Apple appreciates this from her Best Friend. Blondie seems to admire Apple more than the other students and often tries to convince Apple that Blondie is fairytale royalty just like her.

Blondie and C.A. Cupid are good friends and roommates. Although Cupid came to Ever After High to replenish the hearts of the students, she made good friends, such as Blondie. In "Blondie Branches Out", Cupid comforted Blondie when she was having doubts about her destiny and supported her in her choice to remain a Royal.

Blondie is also shown to be on good terms with Dexter Charming, the cameraman for her MirrorCast show, although they hardly interact outside work. For a while, Blondie was suspicious of Cerise Hood and even went as far as posting a false report on her, but when she realized it was all a mistake she apologized and the two became friends.

Blondie is not in a relationship and says that she is "waiting for someone "just right" to be her fairy tale prince". Despite this Blondie appears to have a slight crush on Daring Charming, like many other girls at the school. She was seen giggling as he passed her in the halls and acts coy when he is around. Yet Blondie was one of many who believed Daring was Apple's prince and was faithful in their blossoming relationship to come, describing them as "THE perfect couple".

Ironically, Blondie owns a baby bear named Grizz that she got in the Enchanted Forest on her Legacy Year.

Blondie can unlock any door, a power that will come in handy when she lives out her destiny. Blondie uses hairpins to open locks and doors. Due to her accidental door-locking, Holly O'Hair is in usual need of Blondie's assistance.

Blondie wears a large blue hairband with a bow and bear on it. She wears a blue and yellow dress with blue keys on her top. A bow is tied around the top part. In the middle of her top, she has three vertical buttons and a square surrounding it. On her collar and sleeves, she wears translucent ruffles. On Blondie's skirt, she has two small ballgown flaps on the top of her skirt, and a bear portrait of the family of bears in her story which are seen printed on her skirt multiple times. Blondie carries a gold, heart-shaped handbag with blue handles.

Blondie's hair is tied into two miniature twin tails with a small blue crown on her head. She has black puffy sleeves with blue bows at the end of each sleeve. Blondie has a bear collar with a pink bowtie on it. She also has her own blue bowtie in the middle of her shirt. Unlike her basic outfit, her two ballroom flaps are now larger and yellow. Her skirt has black, yellow and blue patterns on it. 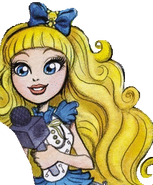 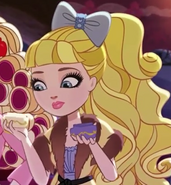 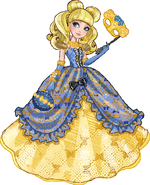 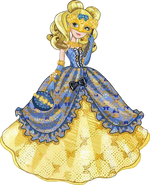 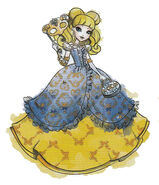 Blondie as a Phoenix

Blondie opens the Storybook of Legends

Blondie and her best friends