Chase Redford is the adopted son of the Red Queen from Through the Looking Glass and What Alice Found There. He serves as Wonderland High attendance officer and his alter-ego is The Red Knight. He first appears in Way Too Wonderland.

Chase is very loyal to Wonderland High, and strictly follows the rules but would like to appear more friendlier than the strict rules or his mother allows him to. He isn't one who fears challenges, he doesn't know how to dance but still agreed to compete with Darling Charming in the "dance-off" and lost. He is also impressed with Darling's fighting skills, but not much is known about his personality.

Chase has short black hair with a red streak and has blue eyes.

Settings are places where fairytale characters live and their stories are based. Chase Redford's setting is an unusual place called Wonderland. Wonderland is the magical and madness-filled location which the life of Ever After rely on. Wonderland has a large selection of strange buildings and plants in it's many locations. It is home to all Wonderlanians.

Chase is the adopted son of The Red Queen. It is unknown whether he has any more family, but he could be related to the other Red Peices of The Wonderland Chess Game.

It is unknown who Chase's friends are. But he seemed to have a strange relationship with Courtley Jester because he always gave in to her orders as if she were his mistress. They spent a lot of time locked up in the Wonderland management office. The type of activities they did is unknown, but rumors have it that strange noises were heard inside.

It is unknown whether Chase is in a relationship or not, but he has shown admiration for Darling Charming and is impressed with her skills. He even bows in a request to dance with her.

It is unknown if Chase has any magical powers, but he is shown to have incredible swordsmanship skills in Way Too Wonderland when he and the White Knight (A.K.A. Darling Charming) have their duel. 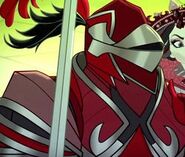 Chase as The Red Knight