Cheshire Cat is the mother of Kitty Cheshire and is a part of Alice's Adventures in Wonderland. She appears in "Spring Unsprung" and Spring Unsprung:The Purrrfect Prank.

The Cheshire Cat is sneaky and can also be considered evil, as she tried to ruin the Spring Fair-est. She also encourages her daughter Kitty Cheshire to be like her, mischievous and conniving.

Cheshire Cat has bright blue cat eyes, lilac hair that she wears in a high ponytail and a huge smile. Like her daughter Kitty, the Cheshire Cat has long painted finger-nails, but hers are painted silver while Kitty's are bright blue.

Settings are places where fairytale characters live and their stories are based. The Cheshire Cat's setting is an unusual place called Wonderland. Wonderland is the magical and madness-filled location which the life of Ever After rely on. Wonderland has a large selection of strange buildings and plants in it's many locations. It is home to all Wonderlanians.

She is the mother of Kitty Cheshire, who currently attends Ever After High and she sometimes refers to Kitty as Kitten.

When young, Cheshire was friends with the Pied Piper. It was she who chose the name Melody for his daughter, since she loves names that end with y.

Like her daughter, the Chesire Cat can disappear at will, leaving only a smile before it too disappears. She can become invisible and teleport over vast distances but she cannot cross the worlds without a portal. Kitty and her mom can talk to each other when they are apart by drawing a smile in the air, as seen in Spring Unsprung:The Purrrfect Prank. 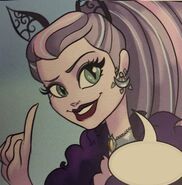