Courtly Jester is the daughter of the Joker Card and appeared in the Special Way Too Wonderland. She is the Student Vice Principal and also the Principal of Wonderland High. She wants to be the queen of Wonderland and tries to sign Lizzie's page on the Storybook of Legends, but is stopped by Raven Queen. She is a Royal for unknown reasons presumably since she is also willing to take her destiny as a Joker Card just like her father. In Way Too Wonderland, Courtly was the villain.

Courtly is malicious, clever, ambitious and quick in her actions and mood swings. Later in Courtly Pleads Her Case, she has realized her mistakes and asked the students of Ever After High to let her enroll in the school, a plea that was accepted.

Courtly has blonde hair with light blue and purple streaks in her fringe/bangs. Courtly's fringe normally covers her right eye and ends in a large swirl. Her eyes are bright pink and she paints a white diamond around her left eye. She almost always wears a large smile and has expressive violet eyebrows.

Courtly Jester's setting is an unusual place called Wonderland. Wonderland is the magical and madness-filled location that the life of Ever After relies on. Wonderland has a large selection of strange buildings and plants in its many locations. It is home to all Wonderlandians.

Courtly is the daughter of the Joker Card.

Courtly names Duchess Swan as her best friend. She can also be seen hanging out with the other Wonderlandians at Ever After High.

She was once genuinely interested in Chase Redford, but her ambition to overthrow the Queen of Hearts was superior. She found a way to dominate Chase by using his perversions against him, as he would be a key piece in her masterful plan.

After obtaining her parole, she decided to take her second chance to have a normal life. She confessed to having a crush on Alistair Wonderland and says that she's liked him since forever after.

Courtly may have a Royal Flamingo, a March Hare, a Rocking Horsefly or a Cuddly Puppy

She was not born with powers, but she has magic cards and was given some evil powers from The Evil Queen's spellbook. The book was later destroyed by Raven Queen. One of the powers Courtly says she can still make herself look like someone else, despite the loss of the book.

Courtly's wears bright colours and her outfits consist of shades of purple, red, black and gold. 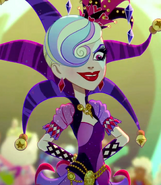