“And once you've flashed your killer smile, there's not much more to it. Just be awesome, tall, handsome, popular, and incredibly good-looking. Basically, be me!”
―Daring Charming +

Daring Charming is a Royal, a choice that was motivated by Daring's father, King Charming, who encouraged him to follow his destiny due to Daring's looks and positive attitude. Daring is the oldest of the King's children and is destined to be a great Prince Charming.

Daring is very self-obsessed and loves looking at himself in his mirror. Daring is also very charming and flirtatious towards the female students and it is said his smile can make any girl swoon. Knowing this only adds to Daring's ego. In Epic Winter Daring was cursed to be a beast and became more kind and selfless to undo the curse.

As each Ever After High student has their own fairytale-represented name, Daring's name represents him, literally daring, handsome and charming.

Daring is the eldest child of King and Queen Charming. He has two younger siblings, Dexter Charming and Darling Charming. His paternal grandparents are King Auspicious Charming and Queen Alluring Charming. His father has five siblings and together they have 18 children in total: Daring, Dexter, Darling, Charity, Courageous, Cherished, and Caring, Elegant and Errant, Fragile, Fearless and Fairest, and Good-Enough, Gallant, Glorious, Gutsy, Gracious, and Gorgeous.

Daring is best friends with his brother Dexter Charming, his roommate Hopper Croakington II and Sparrow Hood. He also hangs out with most other male students as well.

Daring's relationship with his brother is a close one but Dexter often feels overshadowed by Daring. Daring was always the more heroic of the two brothers and gets most of the attention. Although Daring has offered Dexter a helping hand on one or two occasions, he is mainly oblivious to Dexter's insecurities and doesn't do anything to eliminate them.

Daring is often seen around the school with either Sparrow or Hopper, sometimes both. They are all on the Bookball team together and share a table in the Castleteria and Hocus Latte Café.

Daring is said to be one of the most handsome and popular boys at Ever After High, and can make many a girl swoon with his trademark 'Charming' smile. He has had many admirers, crushes, and girlfriends.

Daring was thought to be the destined prince of Apple White and had hoped to marry her when their story started, but while in high school Apple and Daring had decided not to date each other as Apple would rather focus on studying. In the story Fairy Tail Ending Apple tells Meeshell that her and Daring actually dated, but their relationship ended due to Apple wanting to focus on her studies instead. Everything changed in "Dragon Games" when Apple was poisoned and fell into an enchanted sleep. Her friends went to find Daring, believing he was the only one who could break the curse, but Daring's kiss failed and proved he wasn't actually Apple's prince charming. Instead, Apple was awakened by CPR from Daring's sister, Darling Charming. At first, Daring was upset at this revelation, to which Rosabella at first assured that it was because Daring hadn't proven himself. After Daring and Apple speak about their destinies, they decide to remain friends.

In "Lizzie Hearts Fairytale First Date", Daring took Lizzie Hearts out on a date as a dare, but seemed to develop a crush on her, and in "Spring Unsprung", they rode on the Fairest Wheel together. In "A Wonderlandiful World", he flirted with her during Royal Student Council, and later she dubbed him loyal protector of her home Wonderland. He also shows his interest towards her in "Next Top Villain" but she rejects his advances in the novel. It is unknown what happened in their relationship, but the two are no longer together.

In Thronecoming, Cerise Hood wanted to join the school's Bookball team with Daring and the other male students but Daring turned her down, seeing her as nothing more than a damsel that needed saving. He soon changed his mind when the Bookball team was not doing too well and called on Cerise to help, she obliged and won them the game. At the Thronecoming Dance, Daring apologizes to Cerise for what he said about and offers to dance with her as a show of his gratitude for her help. She refuses at first, pointing out the many other girls who desperately want to dance with Daring, but he insists by saying he would rather dance with her. It was never confirmed if the two had feeling for each other, but they never started dating.

Daring has also shown interest in Holly O'Hair, who had a crush on him but would never act on it because of her friendship with Apple. He briefly dated Duchess Swan, who has always had eye for him. Raven Queen was slightly interested in him when she thought he left a love poem on her locker, but the poem turned out to be from Dexter instead, which Raven was far more pleased about.

In "Epic Winter", Daring was cursed as a beast much to his dismay. Throughout the ordeal Rosabella comforted him and helped him to see that there was more to him than just his appearance. He began to care deeply for Rosabella Beauty, as it was her who taught him to be selfless. When Rosabella's skiis broke on their journey to find the roses, Daring carried her the rest of the way and during the students' dream, when they were in an Enchanted Sleep, Daring and Rosabella kissed. Daring decided that he would take on the role as the Beast in her story. It would seem the two started dating sometime after the school was saved from the eternal winter according to Facebook.

Daring gets a peacock in Legacy Year that he names P-Hawk.

He has an unnaturally bright, attractive smile bright enough to blind anyone who looks at them and even tan the 3 Little Pigs

He is a natural with all hero type tropes such as swordfighting, putting armour on and riding a horse.

Daring wears a gold crown, a black dress shirt, a pale yellow argyle sweater with a gold collar and lavender and powder blue diamond patterns, a creamy white jacket with dark blue sleeves and gold stripes with the "EAH" logo in red with gold lining and gold embellishments down the front of the jacket, blue jeans, and white sneakers.

Daring wears formal, dirty white uniform prep clothing underneath his preppy black sweater-vest. His sweater-vest is lined with red and has various gold buttons and badges on it. Daring wears pale brown pants and dirty green sneakers. Daring accessorizes with a watch, belt and mirror ring.

Daring wears a black suit with gold peacock trim over a red vest with gold buttons, and a blue bow tie. His shoes are black and his socks are red.

Daring with a group of his fans 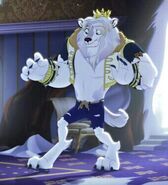 Daring in his Beast form from Epic Winter
Community content is available under CC-BY-SA unless otherwise noted.
Advertisement