Darling Charming would rather be a hero than a damsel in distress and wants to show the fairytale world that she has what it takes to be a hero. Because of this, she sides with the Rebels. Proof of Darling being brave and adventurous is that she disguises herself as a knight in Hero Training class, (which only permits boys,) in order to show off her best talents.

Darling Charming is adventurous and doesn't like being tidy and ladylike. Her mother Queen Charming scolds Darling when she does not act this way. Darling doesn't like it when people treat her like she is helpless, although she has to pretend to be when in Damsel-In-Distressing class, a requirement Darling sees as a fairy-fail. Due to her heritage Darling acts charming and perfectly lady-like at social events to please her parents.

After revealing in Way Too Wonderland that she is the White Knight, Darling dropped her damsel-in-distress act. She is very ladylike still but is ready for adventure anytime. In Dragon Games she showed she has a big urge to play the hero and be a leader. Darling is also quite smart, getting others hints quickly and noticing when things aren't right.

Darling has long, curly, light blonde hair with crystal blue streaks. Her eyes are bright blue and she has a beauty spot just under her right eye. Her clothes are silver, blue, and pink themed. Her dress has pink and blue prints, like Ashlynn’s dress.

As each Ever After High student has their own fairytale-represented name, Darling's name means very dear, dearly loved, favored and cherished.

Darling is the only daughter and youngest child of King and Queen Charming. She has two older brother, Daring Charming and her older twin brother Dexter Charming. Her paternal grandparents are King Auspicious Charming and Queen Alluring Charming. Her father has five siblings and together they have 18 children in total: Daring, Dexter, Darling, Charity, Courageous, Cherished and Caring, Elegant and Errant, Fragile, Fearless and Fairest, and Good-Enough, Gallant, Glorious, Gutsy, Gracious, and Gorgeous.

Her Best Friends Forever After are Raven Queen and Rosabella Beauty as she sees them both as strong girls who stand up for what they believe in. Darling is also close friends with her brother Dexter and usually gets along with her cousins too. She is also good friends with Chase Redford in Way Too Wonderland who admires her skill and bowed in request to dance with her.

According to her doll profile, Darling has stated that she prefers boys who are pure of heart but is protected by her two brothers Daring and Dexter Charming from crowds of startstruck lovers. Young suitors often ask Darling to marry them, but she is aware that they don't really love her, they just want her families name and status. King Charming will often loose his temper and threaten the startstruck lovers with his mighty sword, or send Daring and Dexter to chase away the "would-be husbands".

Darling has a colour changing horse named Sir Gallopad. Sir Gallopad was chosen for Darling because he was a slow and steady steed, but secretly he loves to gallop. Darling also has a brown and white dog named Chance. Her Dragon Games dragon is called Hero Wing.

When Darling flips her hair in a certain way, she can briefly slow time down for anyone who is watching her. She is also very strong and athletic. 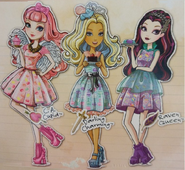 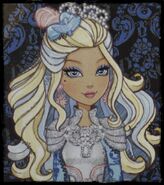 Darling as the White Knight

Darling with the White Knight Armour

Darling with Rosabella, Faybelle and Bunny