Dexter Charming is the son of King Charming and the second eldest child in his family. Dexter sides with the Royals. Although his father often criticises him and compares him with his older brother Daring, (a comparison that Dexter is sick of), he remains a Royal. While he may not be what his family would call a "traditional Charming Prince", Dexter has his own personal traits that makes him Charming. One such trait is his extremely attractive eyes, instead of his brother's attractive smile.

Dexter Charming is sensitive, caring and shy. He is a very tech guy. With his kind and modest attitude, the girls of Ever After High enjoy his company, Raven, Cupid, Ashlynn, and Cerise in particular. Dexter also feels slightly overshadowed by his brother Daring.

As each Ever After High student has their own fairytale-represented name, Dexter's full name is known as Dexterous, meaning smart and good with his hands. It also means clever, bright and inventive. The names of King Charming's children each begin with the letter "D".

Dexter is the second eldest child of King and Queen Charming. He has an older brother, Daring Charming and a younger twin sister, Darling Charming. His paternal grandparents are King Auspicious Charming and Queen Alluring Charming. His father has five siblings and together they have 18 children in total: Daring, Dexter, Darling, Charity, Courageous, Cherished, and Caring, Elegant and Errant, Fragile, Fearless and Fairest, and Good-Enough, Gallant, Glorious, Gutsy, Gracious, and Gorgeous.

Dexter is best friends with his roommate Hunter Huntsman, they are often seen around the school together and are both on the Bookball team. He also hangs out with Humphrey Dumpty due to their shared interest in technology. Dexter also says his brother Daring is one of his friends, even though he feels over-shadowed by Daring most of the time.

Dexter's girlfriend Raven Queen has been one of his close friends since before they started dating and their friendship still remains strong. He spends a lot of time with C.A. Cupid, who helps Dexter out a lot although she wishes to take their relationship beyond friendship. Dexter is on good terms with Hunter's girlfriend Ashlynn Ella and they are often seen sitting together.

Dexter's girlfriend is Raven Queen. Dexter had a crush on Raven for a long time but was unaware that she likes him back, thinking that Raven liked his brother Daring instead, (due to a mix-up with a love poem in "True Hearts Day Part 2".) After many awkward conversations and failed flirting attempts, Dexter finally found the courage and asked Raven on a date in "Chosen With Care". In "Date Night", Dexter takes Raven on their date to the Multi-hex Theatre and they have a great time, but the date is cut short when Ashlynn, Poppy, Cupid and Blondie get lost in the Dark Forest looking for the Blue Moon Forest Festival. Raven and Dexter go with their friends to rescue the girl and find them safe in the Forest, then Raven and Dexter finish their date dancing at the Blue Moon Forest Fest, after this they became a couple. In Way Too Wonderland, Dexter seemed concerned when the girls, (Raven in particular,) went missing. At the Wonderland party he hugged Raven in relief upon seeing her safe. Dexter appears to be a sweet and kind boyfriend who cares for Raven deeply.

C.A. Cupid has had a crush on Dexter since before she came to Ever After High, but had never taken their relationship beyond friendship as she was aware Dexter liked Raven instead. As it is Cupid's job to help students in affairs of the heart, Cupid would help Dexter in his attempts to impress Raven, despite her feelings. After Dexter and Raven started dating, Cupid seemed to fully accept that her and Dexter aren't meant to be, although it was hard for her at first.

Dexter gets a jackalope he named Mr. Cottonhorn on Legacy Year. A jackalope is a mythical creature, a jack rabbit with antelope horns.

Like Daring, he is able to make girls swoon. Dexter does this by taking off his glasses, rather than by smiling.

Dexter wears a black shirt underneath his blue and white kerchief and blue jacket. He wears gray pants and black and white sneakers. He has black, rectangular glasses and wears a gold, crown-like thing on his forehead.

Dexter wears a striped sweater vest. Underneath, he wears a lavender shirt with a blue tie. Dexter wears a large gray jacket with various ornaments and buttons on it. Dexter accessorizes with a larger crown and a ring in the shape of a royal pendant.

Dexter wears a white shirt with a blue grey bow-tie. He wears a gray sweater vest with a pocket watch chain and various golden buttons. Dexter wears blue pants. He accessorizes with a casual fedora and blue and black formal shoes. 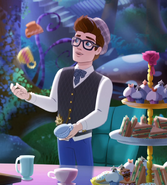 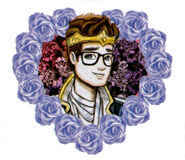 Dexter inside the Mirror Lab

Dexter and Raven on their first date, Date Night.