“Time to go black swan on this place.”
―Duchess Swan

Duchess Swan is destined to be a tragic heroine, yet she remains a Royal, (if not a strongly conflicted one). The Royal Duchess schemes to steal another’s destiny and their Happily Ever After, she believes that the Rebels' stories aren't as good as the Royals, therefore doesn't bother switching stories with them. Duchess did once strongly consider being a Rebel but decided being the best Royal she could be was more important. Duchess is a talented ballerina with grace and poise, who tends to dance instead of walk. It's clear that she doesn't think it's fair for her to have a tragic ending while other Royals like Apple White and Ashlynn Ella have a Happily Ever After. It is unknown whether or not Duchess will re-write her destiny after "Way Too Wonderland".

Duchess Swan is a stubborn and cunning girl who is an opportunist and is willing to use dishonesty to get what she wants most: the promise of a Happily Ever After. She is jealous of those above her and cruel to those below her, due to her own insecurities. She targets Apple White and Ashlynn Ella most of all, as they are destined for the most success and happiness and Duchess thinks they take it for granted. Duchess looks down at Raven Queen because she believes that Raven's story is just as bad as her own, if not worse. However, in more recent episodes we see Duchess's nice and thoughtful side. In Best Feather Forward, Humphrey Dumpty helps Duchess with her thronework and she is very grateful. It also appears that as the series go on, she is much kinder.

Duchess has long black, white and lilac streaked hair which she wears in a low ponytail. She has brown eyes and dark, striking eyebrows.

As each Ever After High student has their own fairytale-represented name, Duchess' name comes from the grace of a swan. Duchesses are trained to be graceful. In peerage, a duchess is ranked below a princess, symbolizing how Duchess is not the most popular or admired girl at Ever After High.

Duchess Swan's setting is the house where she grew up in and the lake that is located behind it.

Duchess Swan is the daughter of the Swan Queen from the fairy tale Swan Lake. It is revealed in Next Top Villain that her mother is permanently stuck in swan form and she lived with her grandmother when young. She and her grandmother are on good terms, and she is very proud of Duchess' grades. They usually send each other letters during school time. It is unknown who her father is, but it is possibly Prince Siegfried from Swan Lake.

Duchess is infamous around Ever After High and does not have many friends. Faybelle Thorn is one of the few people Duchess gets along with due to their shared selfish personalities, Duchess even states herself that "birds of a feather flock together" when talking about their friendship.

She is apparently also good friends with Kitty Cheshire. In Kitty's Curious Tale, she is seen having tea with Duchess. Her dancing is admired by Justine Dancer and Duchess eventually returned Justine's admiration.

Duchess' partner in crime was Sparrow Hood and they were friends for a short time until Sparrow left Duchess due to their friendship making him excluded from the other students.

Lizzie Hearts is Duchess' roommate, they appear to be on good terms most of the time, but Duchess' selfishness and Lizzie's temper can get in the way. Courtly Jester named Duchess as her best friend, although the two never interacted directly since Courtly's arrival at school.

Duchess Swan has shown attraction to Daring Charming and has been on several dates with him. According to Lizzie Heart's diary, Daring was spotted on a date with Duchess while he was dating Lizzie. Duchess did not seem to pay mind to this. In Next Top Villain she tries desperately to get his attention. Of course, it has been shown that Daring is not as attracted to her as she is to him.

She is the crush of the smallest Billy Goat Gruff.

Duchess has unlimited swan powers. She can walk on water, fly, swim, and even transform into a swan.

In Next Top Villain, it was said that once, her feet turned into a swan's webbed feet, an event which made her classmates call her an "ugly duckling".

Duchess' color scheme consists of black, lavender, and white. She tends to add colors like silver and extremely light grey.

Duchess wears a larger version of her basic outfit's crown. She wears a large feathery dress that contains various shades of white feathers.

Duchess's dress at the Faybelle Formal 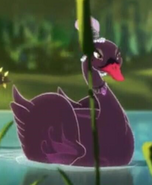 Daughter of the Swan Princess 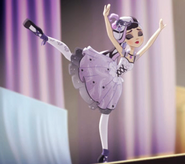 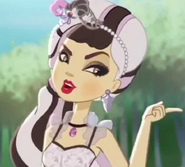 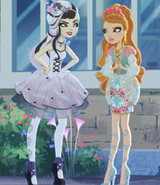 Duchess with Hunter and Ashlynn