Earl Grey is the trusty dormouse companion and pet of Madeline Hatter. Described by Madeline, he is an extremely intelligent dormouse who knows the best hiding places, presumably the best spot to be is in her hat of many things. Earl Grey sometimes appears throughout the series as Madeline's tea-party buddy.

Related to Pesky, Earl Grey is extremely naughty, although he is extremely intelligent. Kitty Cheshire chased him around the dorm room for the whole night and wasn't able to catch him due to his superior hiding skills and intellect. Earl Grey enjoys good clothing, exploring, scurrying and slumbering. He also loves to hum songs with his owner, have tea and solve riddles.

Earl Grey is a grey dormouse and wears a large, tea cup shaped, maroon coloured top hat with a white brim. He wears pink cuffs on each forearm, a large double layer pink collar and a maroon sash across his body.

Earl Grey is named after the tea "Earl Grey" which is often used as an ingredient in snacks.

Earl Grey from the books 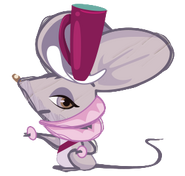 Dancing in a bubble

As a judge in Rebel's Got Talent

Earl Grey at a distance sitting next to Lizzie Hearts

Earl Grey about to hide in Maddie's Tea cup Hat

Maddie and her trusty friend
Community content is available under CC-BY-SA unless otherwise noted.
Advertisement