Fairies Of Ever After High

Fairies appear all around Ever After High. Some are human sized like Faybelle Thorn, Farrah Goodfairy and The Fairy Queen, others are smaller.

people, doing things for them, like cleaning up the school, in exchange for eternal bondage or a special magical item.

Pixies are usually protectors of their own dominion and has strong magic abilities to carry out their task. Pixies resemble young girls who are short in stature and resemble an animal native to the habitat they protect.

In Dragon Games we were introduced to three forest pixies; a bird pixie Featherly, a rabbit pixie Harelow and a deer pixie Deerla.

In Epic Winter we were introduced snow pixies that represented animals too; a polar bear pixie Veronicub and a snow fox pixie Foxanne. Unlike the forest pixies, the snow pixies have a much more mundane task as Crystal Winter's handmaidens.

Known Fairies in Ever After

Fairies at the Forest Fest

Two of Ever After Highs smaller fairies. 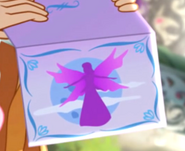 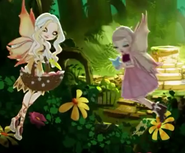 The Snow Pixies are helping the Snow Princess.
Community content is available under CC-BY-SA unless otherwise noted.
Advertisement