Faybelle Thorn is a Royal at Ever After High. She wants her role as villain Sleeping Beauty and enjoys casting spells and causing evil. As Raven's mother stole that role from her mother she holds grudge against Raven. Faybelle is the head cheerleader/cheerhexer squad at Ever After High and is normally seen in her cheerleading outfit. Faybelle is a Royal, who is willing to follow her mother's footsteps, the Dark Fairy herself and makes her frenemy Briar Beauty fall asleep for 100years.

Faybelle is looking forward to being a villain and wants to fulfill her destiny as the baddest fairy of them all. But according to her diary, Briar Beauty said that she doesn't have to be evil to everyone just because she is destined to be a villain in her story. Faybelle is passionate about cheerhexing and can be pushy and rude if things don't go her way. Despite this she still realizes when she has gone too far and reluctantly apologizes. Faybelle tends to become friendlier towards the people she wronged.

In Dragon Games she allies with The Evil Queen to learn how to be a better villain but in the end helps in defeating her. She is seen speaking happily with others after this, not seeming a bit worried about the loss of her hero.

In Epic Winter she tags along the other girls with sinister plot which she seems to have doubts about going through with many times and in the end is relieved she doesn't have to. Both of these show that underneath the villain surface lies a caring heart.

Faybelle has platinum blonde hair that has an icy blue and teal streaks in the front, she wears her hair in a high ponytail. Her eyes are grey and she has pale blue wings. Faybelle paints a detailed pattern around her right eye.

The name Fay means fairy. With "Fay" being an individual name already, "belle" would likely come from the French meaning of "beauty", much like "Belle" from Beauty and the Beast. When pronouncing her name, it also rings similar to the word "fable".

Faybelle Thorn's setting is her family home, The Dark Fairy's Villa. The Villa is elegant in design and built of white stone. It has marble steps which lead to a pair of French Doors that have tall windows on either side. Outside there is a circular driveway, a manicured lawn, sculpted hedges and a koi pound.

She is the daughter of the Dark Fairy from the Charles Perrault story of The Sleeping Beauty. It is unknown who Faybelle's father is.

Faybelle tends to be rather selfish and spends a lot of time on her own, so she has few proper friends, although six fairies from her cheer-hexing squad often follow her around school as her entourage.

Faybelle says that her future nemesis Briar Beauty is her best "frenemy", and the two have shown to be supportive of each-other on a few occasions. She was also friends with Ginger Breadhouse when they were children, but the friendship didn't last due to their over-competitive mothers.

Faybelle's only true friend is Duchess Swan. Faybelle discriminated Duchess in "Next Top Villain", which is set before the two were friends but they must have resolved their differences some time later.

She temporarily served The Evil Queen during “Dragon Games”

Faybelle says "a relationship would just clip her wings", so she is currently not looking for a boyfriend. However, Faybelle does admit that some boys around the school are cute according to her profile. In the Ever After High book Fairy's Got Talent, C.A. Cupid attempted to set Faybelle up on a date much to Faybelle's annoyance. C.A. Cupid believes that Faybelle's lack of love in life is the reason for her "wilted wings".

Faybelle's powers share similarities with Raven Queen's, as she is able to curse people and cast spells. She can fly and when she is angry she can make items float around her. Faybelle can use her finger to make people and objects float as shown in An Hexclusive Invitation. Her power colour is ice blue whereas Raven's is lavender. When Faybelle makes her spells in cheer form it makes them stronger.

Faybelle wears a blue bow in her hair with thorn embellishments. 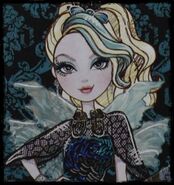 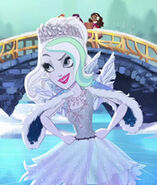 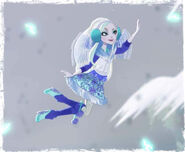 Facebook caption of Faybelle in her Epic Winter outfit 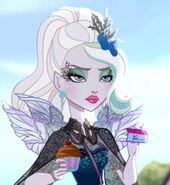