Giles Grimm is the brother of Headmaster, Milton Grimm. Giles was meant to run the school with his brother Milton, but because of a difference of opinion over the students being allowed to change their destinies, Milton cursed Giles with a babbling spell and locked him in The Vault of Lost Tales. Even though Giles spoke Riddlish, which, according to Madeline Hatter, is not an exact language, he is an important character, as he knows the truth about The Storybook of Legends.

Giles was released from his babbling spell by the girls in Thronecoming, who were searching for the real Storybook of Legends but instead, they found pages that contained a riddle that broke his curse. Giles was then reunited with his brother, Milton Grimm, whom he forgives and they start a new chapter. In the webisode Spring Unsprung it was established that the Brother's Grimm are both now Headmasters at Ever After High.

Apart from speaking Riddlish, he appears friendly towards students, welcoming, polite, helpful, and concerned over Raven's choice to not sign the Storybook of Legends. He seems quite an intelligent, yet, soft spoken man.

Giles has shaggy grey hair, long grey beard and moustache and he wears small, half rimmed glasses on the tip off his nose. He wears a long, wine coloured suit jacket with patches on it and black trim, a dirty white shirt that the sleeves are too long, a mustard polka dot ascot and a orange patterned waistcoat. He also wears odd coloured socks, one blue striped and one mustard colour, that are pulled up over his beige trouser/pant legs. He has old sneakers with one shoe having the lace missing. Also hanging from his waist, Giles carries what appears to be a magnifying glass.

Giles has a brother called Milton Grimm, the headmaster at Ever After High.

In The Vault of Lost Tales, Giles has a magic mirror which enables him to view what is happening in the outside world of Ever After High.

Giles in his room, under The Vault of Lost Tales

Giles in his room

Giles Grimm looking at Raven through a Magic Mirror

Portrait of Giles in the halls of Ever After High

Giles in his room

A photograph of Giles and his brother Milton as children.

Giles looking into a Magic Mirror 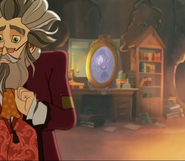 A worried Giles; Brooke Page possibly in the mirror reflection

Milton and Giles under the true hearts tree.