Gus Crumb is Helga Crumb's cousin and the son of Gretel, from the story Hansel and Gretel. Food (specifically sweets and candies) is constantly on his mind. Gus and his cousin appear to be at the service of Milton Grimm, guarding his office and doing tasks for him like writing on a cave wall to trick Raven Queen in The Storybook of Legends.

Gus Crumb can be easily bribed with sweets. He is aware of his destiny to cook witches but he and his cousin are still afraid of witches like Raven Queen.

In the books he has short yellow hair. In the webisodes he has short, spikey light pink hair with yellow streaks. Apart from wearing different clothes and the hairstyles, Gus and his cousin Helga look extremely similar, with even their voices sounding identical.

It is currently not known where Gus lives.

Gus' mother is Gretel from the fairytale Hansel and Gretel, along with his uncle Hansel and cousin Helga Crumb.

Gus' only friend seems to be his cousin Helga.

Gus does not seem to be in a relationship.

It is unknown what type of pet Gus has, if any.

Gus doesn't appear to have any powers.

In the books, he wears green leather shorts with suspenders and hiking boots. In the webisodes he wears pink shorts with red suspenders, a pink waistcoat, a white shirt with light yellow collar and pink and white trainers. 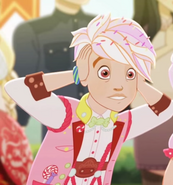