View source
watch 01:36
We're Getting Mutants in the MCU - The Loop
Do you like this video?
Play Sound

Helga Crumb is the daughter of Hansel from Hansel and Gretel. She also has a cousin that goes to Ever After High with her, Gus Crumb. She and her cousin can be found outside Milton Grimm's office appearing to be guarding it and they also do tasks for him.

Helga, towards others and her cousin Gus, is a threatening person with a strong addiction to candy. Out of the two of them, Helga is likely to be their leader, and they can both be easily scared off. Helga has a high pitched voice. She and Gus both believe they will starve if they go without food, (even in a short space of time,) and are easily bribed with sweets.

In the books Helga has curly blonde pigtails. In the webisodes she has long, light pink curly hair she wears in a sideways ponytail with a pink bow. Apart from the clothes and hair, Helga looks extremely similar to her cousin Gus, with even their voices sounding identical.

It is currently not known where Helga lives.

Helga is the daughter of Hansel, Gus Crumb is her cousin and Gretel is her aunt.

Helga's only friend seems to be her cousin Gus.

Helga does not seem to be in a relationship.

It is unknown what type of pet Helga has, if any.

Helga doesn't appear to have any powers.

In the books Helga wears a green dress embroidered with white flowers, knee high socks and hiking boots. In the webisodes Helga wears a light yellow, light pink and dark pink frilly dress with a red belt. She has white tights and red and white shoes. 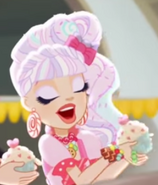