Hopper Croakington II, or as his friends call him, Hopper is an unskilled charmer unlike his father. Hopper is a Royal because of unknown reasons.

Hopper is a very shy boy who turns into a frog when he gets tongue-tied or flustered. This causes Hopper great annoyance when he's trying to flirt with the girls. Hopper considers his alter ego, the charming yet attractive frog of his transformation, very annoying - yet his frog self is eloquent and poetic where his human self is awkward and stammering. Hopper tends to give frog-related stuff to girls as tokens of affection, which they usually find disgusting.

As each Ever After High student has their own fairytale-represented name, Hopper's name represents a jolly action that a frog would do: hop. This name is relevant as he has his own frog form as well.

Hopper is best friends with Daring Charming and Dexter Charming. He is also friends with C.A. Cupid. Although he has a crush on Briar, they are just friends.

Hopper has a huge crush on Briar Beauty, and he tries to get her attention and fails. Though she is disgusted by his frog form, she enjoys the attention she gets from him. Despite this, Briar knows her prince is a hundred years away and isn't interested in dating. Meanwhile, Ginger Breadhouse has a huge crush on Hopper, which he doesn't recognize.

Hopper owns a luminescent dragonfly named Drake that he got on Legacy Year. This could be a potential problem, as when Hopper is in frog form, he could easily eat his pet, but Hopper's dragonfly can look after itself - the dragonfly can breath out spurts of fire.

Hopper has the ability to turn into a frog and back again, and he usually does so when trying to flirt with girls (although he did do it once when being questioned by the Headmaster, so it's more about him being at a loss for words). Hopper does this unintentionally most of the time, and considers his failed attempts annoying, as he proves it by exclaiming formal curse words such as "Blast!". A kiss will turn him back into a human instantly, or the spell wears off after a few minutes.

Hopper wears a white shirt with a formal tie under his pink formal vest and red jacket with the same patterns, in different laid-out patterns. His jacket has a black tux collar. Hopper wears light brown knee-length shorts and he accessorizes with a frog prince crown and a yellow pocket hanker-chief.

Hopper wears his hair in a stick form. He wears a black shirt with a white collar underneath his black and pink over-shirt. He wears a textured dark turquoise colored robe with leopard print shoulder pads and a majestic maroon cape. Hopper accessorizes with a large king-sized crown, a dark turquoise bow tie, a badge and a sun-resembling pocket watch and pocket watch chain. 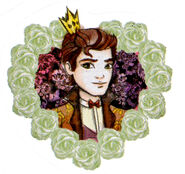 Son of the Frog Prince