Humphrey Dumpty is a computer whizz and musical artist. He writes and preforms rap music known as "a warding beat", this type of song can be used to discourage daemons damaging the MirrorNet. Humphrey creates his demo tracks in his studio, which is his dorm room with a makeshift sign on the door saying Dump-T Studios.

Humphrey is kind and friendly but likes to be left in peace when he is gaming in the Mirror Lab. He is also shown as extremely helpful to his follow students, most notably Apple White and Duchess Swan. Humphrey enjoys rapping and likes to call himself a music aficionado.

Humphrey has light hazel-brown eyes and pale blond hair styled to look like cracks. He also wears a small crown tilted at an angle.

Humphrey's father is Humpty Dumpty from the nursery rhyme with the same name.

Humphrey is friends with follow tech club member and music enthusiast Dexter Charming, who he enjoys remixing music and gaming with. He has a soft spot for Apple White. In "The Storybook of Legends" Apple easily persuaded him to help her spy on Raven Queen and in The Unfairest of Them All, Apple has another quest for him which he happily obliges to do.

He is also friends with Duchess Swan, who he helps with her throne-work in Best Feather Forward, as well as Meeshell Mermaid, who he anonymously helps via the MirrorNet in Fairy Tail Ending.

In "Beanstalk Bravado ", Jillian Beanstalk helps him get over his fear of heights by teaching him to climb a beanstalk.

For a long time Humphrey has had a crush on his friend Apple White, like many other students. He is always happy to help her in a attempt to prove he is a good prince.

In Fairy's Got Talent, six fairies temporarily fall in love with him because of C.A. Cupid's arrows.

In Fairy Tail Ending, Humphrey started an online friendship with Meeshell Mermaid. When Meeshell first arrived at Ever After High she struggled to fit in so he would message her anonymously to offer advice. Eventually Meeshell finds out that her friend was Humphrey and the two seem to have developed feelings for each other.

Humphrey owns a pet chicken named King Benedict. He gets annoyed when people call King Benedict a rooster, because apparently King Benedict is a king chicken and that's very different.

Humphrey is extremely intelligent, however any extra powers of his are unknown.

Humphrey in the Mirror Lab

Wondering if the pie is poisonous 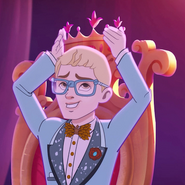 Humphrey in Thronecoming
Community content is available under CC-BY-SA unless otherwise noted.
Advertisement