Hunter Huntsman is a Rebel because he adores animals and is a vegetarian like his girlfriend, Ashlynn Ella. Although in his tale it states that being a hunter he must kill them, he refuses to do so. For additional reasons, Hunter is a Rebel because of Ashlynn. His relationship with Ashlynn was hidden as students are forbidden to have an out-of-story romance as it could result in expulsion from Ever After High. However, in True Hearts Day Part 2, they decided to make their relationship public knowledge, inspired by Cedar.

Hunter Huntsman is very caring and kind and helpful, especially towards Ashlynn. Because of his relationship with Ashlynn Ella he is not keen on his destiny and is happy to change it, making him a Rebel. He is also very polite.

Hunter has brown eyes and brown hair combed over to one side. He buzzcutted the other side of his hair.

As each Ever After High student has their own fairytale-represented name, Hunter's name represents a hunter.

Hunter is the son of the Huntsman from the stories Snow White and the Seven Dwarfs and Little Red Riding Hood. He has a baby sister named Fern.

Hunter is best friends with Dexter Charming and Daring Charming.

He is Ashlynn Ella’s boyfriend.

Hunter has a pet squirrel named Pesky in the webisodes and he got a griffin on Legacy Year in the books.

As shown in "True Hearts Day Part 1", Hunter is able to make anything out of wood in seconds. He can make tables and chairs with tree stumps as well.

Hunter wears a brown vest with a hoodie on it. Two strings are attached to each hole on each side of his hoodie. Under that, he wears a shirt with fluorescent darker green sleeves. His shirt has the art of a forest. He wears dark brown pants.

Hunter has a large green hood covering his head. He has a gray collar and black shirt. The hood is attatched with two silver buckles on a brown and gray hunting jacket. He wears light brown gloves with silver buttons.

Son of the Huntsman 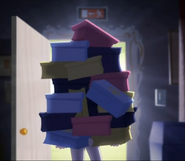 Ashlynn breaking up with Hunter

Hunter and some other Rebels

Hunter with a cupcake

Ashlynn and Hunter in Jack B. Nimbles Class

Ashlynn and Hunter surprised that Cedar has guessed their secret