Mr Jack B. Nimble is a professor at Ever After High and teaches Geografairy and possible Tall Tales. In Cedar Wood Would Love to Lie, he sets his students an assignment to come up with a tall tale of their own.

Jack B. Nimble seems to be a friendly, approachable professor. He is very agile and nimble and can leap over his classroom desk in one effortless bound. He is kind and did not give Raven Queen detention when he caught her using her Mirrorphone during the Tall Tales Lecture, as mentioned in The Unfairest of Them All. Although he appears to have magical qualities, such as, appear to be invisible, retreive objects without others knowing and be in two places at once, he admits that he uses misdirection as his non-magical power.

Professor Jack B. Nimble is a tall thin man with mid length brown hair and a tiny beard and he has green eyes. He wears a gold coloured shirt open at the neck, navy blue jacket with gold embellishments and design, beige trousers, a brown belt with a gold diamond shape buckle, navy blue and black sneakers/trainers with gold laces and gold and white design. Professor Jack B. Nimble also wears a black top hat with a brown trim around the middle, a green flourish design around the top and gold top most section. A large purple feather with a gold and red top section which is shaped to appear like a candle with a flame and a large hat pin with a gold and green tip, sticks out of his top hat from the brim.

Jack B. Nimble is the name taken from a popular nursery rhyme, Jack Be Nimble.

Jack jump over the candlestick.

The most commonly agreed origin of the rhyme is the connection to Black Jack, an English pirate who was notorious for escaping from the authorities in the late 16th century hence Jack be nimble, nimble meaning agile and quick. It has also been associated with the old tradition and sport of 'candle leaping' which used to be practised at some English fairs.

The tradition of candle-leaping originated from an old game of jumping over fires. This dangerous game was banned and replaced by the far less dangerous sport of Candle leaping. In Wendover there were lace-making schools (a good excuse for using children as slave labour). Here it was traditional to dance around the lace-makers great candlestick and this led to jumping over the candlestick. Due to the cost of candles some employers only allowed the use of candles during the darkest months of the year and centred around Candlemas Day, known as the candle season.

The candlesticks design around his desk. 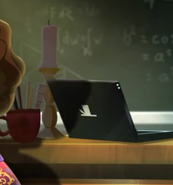 Hat logo on the laptop