Jillian Beanstalk is the daughter of Jack from the Jack and the Beanstalk. She is a Royal.

Jillian can keep her head cool in tough situations and tries to help people around her. She is a bold, fearless, and confident girl, which causes her to be greatly admired around school. She is usually optimistic and encouraging towards others.

She does play a golden harp she has got from her father in the school's band so it's well assumed she's a lover of music. Jillian is athletic and fond of extreme sports.

She has deep brown hair with soft green highlights in a long braid with strands of hair falling from several places. She has plump red lips often portrayed in a confident smile and brown eyes. She is bigger built than others.

She is the daughter of Jack from the story "Jack And The Beanstalk".

Jillian says she is friends with Briar Beauty and Madeline Hatter. It is assumed she gets on well with her band mates, Raven Queen, Melody Piper, Sparrow Hood and Bunny Blanc and she seems to be on good terms with Humphrey Dumpty. She also says Darling Charming and Cerise Hood are her BFFAs as they're always ready for adventure.

Jillian has a crush on Tiny on account of his big heart.

It is unknown if Jillian has a pet or not. 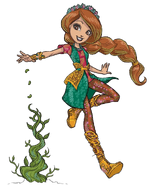 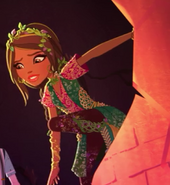 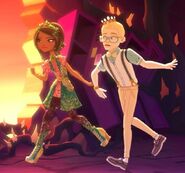