Kitty's Curious Tale is one of the last webisodes in the Chapter 2 webisode selection, it was scheduled to be released on the 14th of October 2014 but was released over one week earlier.

The Narrators are discussing whether there are more Royals or Rebels at Ever After High and a small argument develops. Enter Madeline Hatter who interrupts and asks them what they think about Kitty Cheshire. The Narrators then discuss whether Kitty is actually a Royal or a Rebel. They cannot decide and Madeline asks Kitty herself. Kitty admits that she has been keeping everyone guessing for fun and the Narrators do not think this is fair. Unfazed by this for long, they immediately go back to their previous discussion, are there more Royals or Rebels?

Male Narrator: You - can't - be - serious? There are definitely more Rebels at Ever After High than Royals.

Female Narrator: Wanna bet? What about Apple White? She upholds Royal tradition while always being the fairest of them all.

Male Narrator: Sure, but Rebel Raven Queen happens to be rewriting her destiny.

Female Narrator: Well, Briar Beauty is a Royal through and through.

Male Narrator: You know, let's just watch Kitty shall we? And we'll see that she's a Rebel.

Female Narrator: Well there she is having tea with Duchess Swan, who is a Royal.

Male Narrator: In Madeline Hatter's very rebellious Wonderland Tea Shoppe! And look only a Rebel would cause this kind of trouble in class.

Female Narrator: Being mischievous is Kitty following her story which all good Royals do.

Madeline Hatter: Hey Kitty. *giggles* Can I ask you something? See, the narrators have been watching you and-

Kitty Cheshire: And they want to know if I am a Royal or a Rebel?

Kitty Cheshire: I would tell them buuut.... where's the fun in that? Chaos is keeping people guessing and that makes this kitty puurrr!

Kitty Cheshire: Time for a cat-nap.

Male Narrator: I'm confused. Are there more Rebels or Royals?

Male Narrator: Well what about Madeline Hatter herself? Can't get anymore rebellious than that. Am I right or am I right? 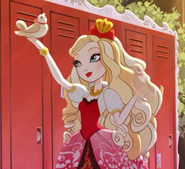