Kitty Cheshire is a Rebel because she doesn't want to follow the rules of destiny. However, it is seen that Kitty is friends with some Royals (Lizzie Hearts, Duchess Swan, Blondie Lockes, Apple White), but likes to cause chaos and trouble, just like her mother, the Cheshire Cat. Kitty is one of the Wonderlandians who managed to escape before the world was closed.

Kitty Cheshire is a very mischievous girl who loves to cause trouble and play pranks. It appears in the Spring Unsprung:The Purrrfect Prank that Kitty undertakes pranks in the hopes of impressing her mother, the Cheshire Cat. She is also a loyal and caring friend because in her diary, Kitty blamed herself for leaving Alistair and Bunny and swore to always look out for her friends. Kitty is an active person though she doesn't like everyone to know it so she can slip from her cat nap to mischief and be back to say she hasn't done anything. Furthermore, in The Legend Of Shadow High, Kitty seems to care about Maddie when she is taken by the Evil Queen.

Kitty has bright blue cat eyes, lilac hair that wears in high curly pigtails and she is always smiling.

As each Ever After High student has their own fairytale-represented name, Kitty, likely short form of Katherine or Katarina is obviously meaning "daughter of the Cheshire Cat". Kitty likely shortened this name herself because Kitty would be easier to say and more obvious.

Settings are places where fairytale characters live and their stories are based. Kitty Cheshire's setting is an unusual place called Wonderland. Wonderland is the magical and madness-filled location which the life of Ever After relies on. Wonderland has a large selection of strange buildings and plants in its many locations. It is home to all Wonderlandians.

Kitty is the daughter of the Cheshire Cat from the fairy tale Alice in Wonderland. Her mother sometimes refers to Kitty as Kitten.

Due to her mischievous nature, Kitty has only a few close friends. Kitty considers Lizzie Hearts as her best and closest friend. They have been friends since 'Nursery Rhyme' and Kitty cares enough for Lizzie to risk her life to save her. Lizzie and Kitty are often seen together around school and enjoy each others company.

Kitty is also good friends with her roommate Madeline Hatter. Although Madeline doesn't always trust Kitty with her friends' secrets, they do care for each other and are seen hanging out and laughing together on more then one occasion.

Kitty does not currently have a boyfriend, love interest, or crush. In her doll profile she states she wants a guy who’s the cat’s meow, rather than guys with puppy dog eyes.

Kitty has a caterpillar named Carrolloo, which is likely the same species as the Blue Caterpillar.

Kitty has the ability to disappear into thin air and teleport to someplace else. Her smile might be hovering in thin air as it is the last thing to disappear. She also has the power of invisibility. Like all wonderlandians, she has Wonderland magic. Kitty can also break the 4th wall by hearing the narrators.

Kitty has her hair in two high pig tails and wears a pair of grape purple cat ears with a small bow on her left ear. She wears a large fur coat with purple fur and snow leopard print going down. She wears a bumpy purple dress and purple stockings and fur heels. She accessorizes with purple fur bracelets and hook yarn-ball earrings.

Kitty wears a fishnet cat ears headband. Her hair is tied together with a black and pink yarn-ball hair tie and a lavender purple robe with a black collar. She wears a purple-brown top with a blue ribbon in the top center.

Kitty has her purple hair clumped together in layers with blue streaks. Kitty wears a uniformed top with a dirty purple tie. Her second layer of top is a blue frilly-edged purple top with grape purple gloves. The gloves have blue frilly edges and a pink stripe. Kitty's skirt is divided in two, the first part being a large range of zigzags and shapes, the divider being black bow ties aline with mint blue Cheshire Cat smiles. The bottom layer of her skirt is a dark pastel purple with light blue teapots and smaller black ones inside of each of them. Kitty accessorizes with a large cat-shaped head wear with a bow on it and black-stringed bow tie, yellow yarn-balled earrings. Kitty wears baby blue stockings and grape purple fluff shoes. 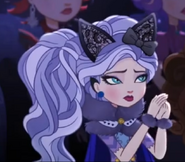 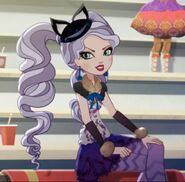 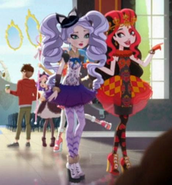 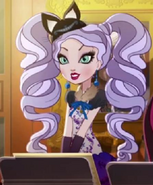 Kitty and her pet caterpillar Carrollo