Lilly-Bo Peep is the daughter of Little Bo Peep from the nursery rhyme of the same name. She attends Ever After High and has a friend there, a Dutch Boy, who is the son of The Hero of Haarlem from the fairy tale of the same name.

Lilly-Bo Peep is a sweet but clumsy girl, often losing control of her sheep. She tries her best to follow her duties but her sheep always seem to get lost. She is shy and easily scared but is super sweet.

Lilly-Bo has long, mid-blue hair with a pale blue streak, that she wears in high pigtails. Smaller front pigtails that match the colour of her fringe that is pale pink with a rich dark pink streak. She wears a pale pink and blue lace bonnet with a bright pink ribbon to tie it under her chin. Her eyes are brown.

Lilly-Bo is the daughter of Little Bo Peep.

She could be dating the Son of the Hero of Haarlem, but she was also seen flirting with Sheep boy in Way To Wonderland.

Lilly-Bo wears a puff-sleeved country top with white ruffles in a pink checker pattern. She wears a pink skirt with sheep imprint on it, along with a mini tie-on apron, and accessorizes with her iconic bonnet and crook.

Lilly-Bo has her hair tied into curly twin tails. She wears a partially translucent layer with a ruffly collar and small pink flowers, underneath is a sleeveless blue shirt. She wears a long thin white skirt which goes down to her ankles, along with pink gloves. Lilly-Bo accessorizes with pink bows in her hair, pink earrings a blue bow belt and blue bow wristlets.

Lilly-Bo is accompanied by her five sheep, but is usually seen with only two or three. 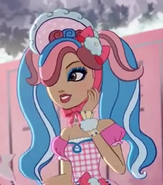 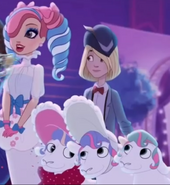 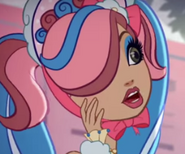