“True friends not subjects ... I will rule my way.”
―Lizzie Hearts +

Lizzie Hearts is a Royal because she wishes to be the next Queen of Hearts. With a small desire to be a quieter and kinder Queen, that is a small change in her story, but that doesn't make her a Rebel. She, like Raven Queen, are to be the villains of their story, but Lizzie wishes to make herself less of a villain and more of an opinionistic Queen of Hearts. In the books, Lizzie reveals that her "off with their heads!" exclamations are just practice for her future role as the villain. Unlike Raven Queen, Lizzie completely engages in the role, thus making her an easily understood Royal.

Lizzie is a kind and caring girl. She is proud of her destiny but wishes to be a kinder Queen than her mother. Although Lizzie is aware of her reputation, and she intends to keep it that way, she appreciates that her close friends understand her for who she truly is. Lizzie is shown to miss Wonderland a great deal, but has not yet given up hope of returning to her kingdom someday.

Lizzie has teal eyes and wavy black hair with red streaks, she also has a red heart that she paints over her left eye.

As each Ever After High student has their own fairytale-represented name, like most of the Wonderlandians, Lizzie's name is short for Elizabeth, meaning superiority. She could likely be named after Queen Elizabeth, due to her reign over the English with superiority and grace.

Settings are places where fairytale characters live and their stories are based. Lizzie Hearts's setting is her mother's palace Card Castle in Wonderland. Wonderland is the magical and madness-filled location which the life of Ever After rely on. It is home to all Wonderlandians.

Lizzie tries to be friendly with most Royals but often struggles to control her temper and comes off slightly mean at times. Lizzie says her best friend is Kitty Cheshire, daughter of The Cheshire Cat. Kitty and Lizzie have been friends since 'Nursery Rhyme' and would even risk their lives to protect each other. They are often seen around the school together.

Lizzie is also good friends with her roommate Duchess Swan. Although Lizzie and Duchess have fallen out before over a few different things, including their shared interest in Daring Charming, they seem to remain good friends. Lizzie is also close to Briar Beauty, as shown in "Lizzie Shuffles the Deck". Briar offers Lizzie friendly advice regarding the way she talks to her friends, which Lizzie graciously excepts.

In Lizzie's diary she has shown an attraction to Daring, however he cheated on her with Duchess. In the webisode "Lizzie Hearts Fairytale First Date" Daring asks Lizzie out on a date as a dare made by Sparrow Hood and Hopper Croakington II. Daring decides to take on the dare and he asks Lizzie Hearts on a date. Lizzie, initially refuses, especially due to the fact that she has never dated before. Daring convinces her that their meetings were like a date and initially they decided to date in secret. In the story Next Top Villain it seems as though Daring is interested in Lizzie, but she does not return his feelings.

Lizzie wanted a hedgehog for a pet and in Wonderland the Queen of Hearts summoned Shuffle and her siblings to line up in order for Lizzie to choose.

It is mentioned in her diary that she had a happy life. Lizzie attended the tea parties of her friends and her mom was also very supportive towards her when she took her class, Non-anger Management. But then, when an old woman came and became close to Lizzie's mother, whispering poison in her mother's ear, it in time led to Lizzie's mother becoming suspicious of everyone. Because of the suspicions, Lizzie was then unable to attend tea parties with her friends. Kitty Cheshire, Madeline Hatter, and Lizzie escaped from Wonderland, but Alistair Wonderland and Bunny Blanc were still trapped in Wonderland but later escaped, as seen in the episode Spring Unsprung.

Lizzie has her hair in a heart shaped bun. It slightly resembles card guards and heart gates of Wonderland. It has a complex design to it by having gold strings under it patterned with small hearts. Lizzie has a red Elizabethan collar with hearts on the side. Under it, she wears a black, red and yellow dress. The top part of it has two parts of a heart coming out of each side of her top. Under it, there is a yellow heart with small victorian and royal patterns underneath. She wears red gloves with black edges with heart-shaped holes trimmed in each space. Her skirt of her dress contains two layers of skirt. Most of the layers there contain a checkered-pattern of red and yellow tiles.

Lizzie wears black stockings with heart shapes on them. She wears red shoes with the buckles on it being cards. She accessorizes with yellow heart earrings, with three strings coming out of the stud. She also wears a small ring that resembles a deck of cards. Lizzie has a red heart-shaped hand bag with a yellow buckle.

Lizzie has her hair bunched up on the top of her head. This time, she has yellow streaks added. It is tied in a large ponytail. She wears the Mad Hatter's signature hat, however it is transformed into her theme colors. She wears spoon earrings (resembling Madeline's). Lizzie has a small red jacket with the sides as upside-down hearts, and the black trim below her gloves are gone. She has a black shirt under her jacket with no patterns on it. Lizzie has two layers of a skirt. The top layer being a pale red with darker red spots on it, and the bottom being black and white rhombus-shaped checker tiles with Victorian heart patterns covering them. She has gray stockings and red pumps with black and white tile checkers on the back of them, yellow heels and black in the front of her pumps and the sole of her heel.

Lizzie's hair is tied back. She wears a gold crown, smaller than her Original. It is on the side of her head. She wears a red collar, tied on to some beads.She wears a gold cuff bracelet, with card designs on it. Lizzie's top is black, and it's covered in red and yellow roses. She has a red peplum. The skirt is a knee length pencil skirt, and it is white with red and yellow roses. She has red high heels, and they are covered in hearts and swirls.

Lizzie's hair is partially in two buns in the back of her head, the rest is down and wavy. Her dress is red with heart designs, and has puffy rose like sleeves. Her gloves are black with heart-shaped holes. Her jewelry and makeup is gold. 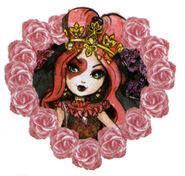 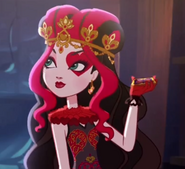 Lizzie with her deck of cards 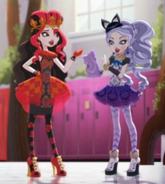 Lizzie's mother, the Queen of Hearts