Meeshell Mermaid is the daughter of the Little Mermaid and King Eric , and is a Royal.

Meeshell is a bit of a shy girl who warms up to people slowly but is a good and beautiful soul. She loves the color blue and finds it soothing. She also loves music and has an amazing singing voice. Her dream is to perform on every stage and screen in the land. In one of the webisodes, she performs in front of the entire school, singing the Ever After High theme song, and she ends up standing with her human legs instead of her mermaid tail.

While living in the ocean, Meeshell liked riding manta rays. She was very good at it, having won first place in her age group in the manta ray race. Looking for shells and sunken treasures was also a favorite pastime of hers.

Meeshell is a literal fish out of water and lacks confidence, especially in her human form but is more comfortable in her true fishy form.

Meeshell's appearance in her Art differs slightly to her webisode appearance. On her Art Meeshell has wavy coral red/pink hair with purple streaks, dark brown eyebrows and blue eyes.

In the webisodes, her hair is curly and light bubblegum pink with white-pink streaks and dark pink eyebrows instead of brown. She has a broad nose and a full but dainty and beautiful smile.

In all her depictions, Meeshell wears shimmery pale pink lipstick and pink and blue starfish are present on the right side of her face, which may be either painted or a birthmark. In water, Meeshell's legs are replaced by a long fish tail the same blue colour as her dress but more lustrous and shimmering. Her scales darken slightly as it reaches her flukes which are long, blue-white with lacy edges. Blue-white and lacy fins like the ones on her dress adorn her hips and near her flukes.

She is the daughter of The Little Mermaid. She has a good relationship with her mother and father who both want what is best for Meeshell. She is also Melody's sister.

Meeshell is friends with Melody Piper with whom she shares the love for music and with her roommate Farrah Goodfairy. She is also friends with Cedar Wood due to their love of swimming. She is on friendly terms with Briar Beauty, Ashlynn Ella and Madeline Hatter, as seen in Meeshell Comes Out Of Her Shell. She also says Apple White and Holly O'Hair are two of her biggest fans. She's on good terms with Coral Witch. Meeshell also has other mer-friends that she left behind in the Sea Kingdom.

Meeshell is destined to meet a human prince. Upon arriving at Ever After High, she takes note of which boys are wearing crowns. She soon comes into contact with a prince, but they only talk over the mirror-net and have never met face-to-face. It turns out the prince is Humphrey Dumpty. In Fairy Tail Ending, it is stated that he clearly has feelings for Meeshell after being rescued by her three times. Humphrey asks her on a date to the multi-hex theater. Meeshell says yes, and kisses him on the cheek.

Splash, a mer-boy from her ocean-school, once held her hand, and even kissed her cheek in the moonlight. Meeshell, however, thinks of him as nothing more than a friend. She has never had a real boyfriend.

Back at Meeshell's home in sea she has a pet seahorse named Finbert. Thanks to a Coral Witch's spell, Finbert can stay at Ever After High with Meeshell. He floats in the air thanks to a protective bubble around him.

To attend Ever After High, Meeshell is given the power to change her fish tail into legs when her tail is out of the water. If she gets wet, her legs will instantly and involuntarily turn back into a tail. One drop of water is enough to trigger the metamorphosis.

As a mermaid, Meeshell can control the ebb and flow of the water and increase water molecules. Just by touching the water, she can summon waves. Meeshell's vocal chords can create sounds above and below the waves and can mimic the sounds of various sea creatures, enabling her to learn the languages of sea creatures including porpoise, dolphins, octopus and manta ray. Meeshell can withstand the intense pressure and cold of the deep sea.

Meeshell In Her Mermaid Form 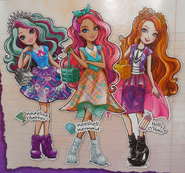