Milton Grimm, known as Headmaster Grimm by the students is one of the Brothers Grimm at Ever After High. He is generally viewed as a type of Mayor in Land of Ever After and kings and queens bow to his apparent wisdom. He was meant to run the school with his brother Giles Grimm, whom he shared a close relationship with, travelling the world together and they both founded the school in 1812. From that point on, fairytale characters started fulfilling their destinies, but Giles soon found out that people were allowed to flip the script and change their destinies. Milton thought this would bring utter chaos in the Land of Ever After and therefore decided to lock Giles up in The Vault of Lost Tales in order to be sealed out from the outside world and where Giles was cursed with a babbling spell.

In the webisode Thronecoming an event took place that released Giles from his spell and he was reunited with his brother Milton. Following this, it was established in the webisode Spring Unsprung that the brothers are both now headmasters at Ever After High.

Milton is also in contact with Mirror Prison, as he is one of the most high-ranked figures in the fairytale world. He, along with The Good King, Raven Queen, Gepetto, Giles and Baba Yaga, are the only one's who know that The Evil Queen is still alive. Milton shows respect towards the Royals, specifically Apple White, his future Queen and makes reference to her being his future queen and even calls her "Your Highness", and, “Future Queen.”

Milton Grimm is a secretive man and a strict headmaster. Although he shows no sympathy whatsoever to the Rebels he shows favour to the Royals, especially Apple, and shows them respect. He has a strong stance on every student following their destiny. But the main reason why he's like that, is due to an incident in his childhood that costed the life of Giles, because of it he insists that no one so much as considers ignoring their desitny.

Milton has grey short hair and a grey moustache with long grey side burns. He has green eyes. He wears a long blue suit jacket with gold trim around the lapel, cuffs, back and buttons, dark blue trousers, grey waistcoat, pale grey shirt, blue tie with a clock tie pin on it and a lilac patterned scarf tucked just under his suit jacket. Milton wears brown shoes. He also carries a set of keys on a large hoop hanging under his jacket and he wears a blue ring on his middle finger of his right hand.

Milton has a brother called Giles.

Milton in his office

Milton Grimm at the end of Legacy Day 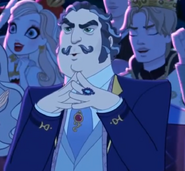 Milton cheering in the audience

Milton pleased of Raven being evil

Milton not wanting to be a chicken man 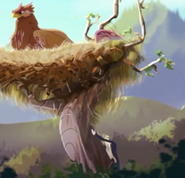 Milton being stomped on in 'Blondie's Just Right'

Milton and his brother Giles as children.

Milton up to no good

Milton in his office with Blondie

Milton Grimm pleased with himself

Milton in his office with Maddie and Lizzie

Milton angry that Raven is rebelling her destiny

Milton and Giles under the true hearts tree as children
Community content is available under CC-BY-SA unless otherwise noted.
Advertisement