Mira Shards is The Evil Queen in disguise, she turned herself as a teen in order to go to Ever After High. She appears in a TV Special Dragon Games. It's unknown where she stands in the destiny conflict but it is likely she is a Royal because she embraces her destiny. She befriends Raven, and tries to influence her to become evil, as Raven now has her full powers which she received in Way Too Wonderland. It is possible that Mira could actually be a real girl and that the Evil Queen is pretending to be her.

Mira is mean and it seems that she does not care about things like friendship. She is excited about dragons and enjoys pulling pranks. She is fan of Raven Queen, whom she tries to manipulate into becoming evil.

Mira has bright red hair streaked with purple and violet-grey eyes. She is taller than most students on campus, and has a notable tendency to arch her brow when confused, angered, or annoyed.

She claims to be the daughter of the Magic Mirror.

Mira is forced friends with Apple White so she can show her around and with Raven Queen who she tries to influence to become evil.

It is unknown if Mira has any interests in romance.

Mira does not have a pet but she can ride any dragon. 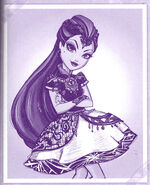