Nevermore is Raven Queen's pet dragon. All the students have a represented pet which came from the Enchanted Forest that which choose the students. See Pets. When Raven first gets her, Nevermore is as big as ten horses.

Nevermore is affectionate towards Raven, growls with joy when she sees her and is attention-grabbing(and seeking), wanting scratches to her underwings and promises of Raven to play soon. She is very loyal to Raven and always ready to protect her from even the greatest threat.

Nevermore’s original appearance indiciates her to have green scales and dinner plate-sized eyes that are red. Her scales are not slimy but smooth and cool like glass and has a spiky tail. Nevermore's wings are leathery and obtains clawed arms.

In the webisodes, Nevermore is a dark purple dragon with lighter purple-toned belly and face. She has spiked, fish/wing-like ear appendages and her wings has swirly pattern on the inside.

As each Ever After High pet has their own fairytale-represented name, Nevermore's name represents something negative. She is "never more" of Raven's pet. Her name is also most likely a reference to the Edgar Allen Poe poem "The Raven"; specifically to the line "Quoth the Raven “Nevermore.”"

Nevermore is friends with Gala and they go walnut picking with Apple White and Raven who are also her friends, but she shares a special bond only with Raven. She as wel possibly is friends with the other Dragon Games dragons/all Legend’s offspring

Nevermore is able to adjust her size whenever she desired, meaning that she go from being a gignantic-thirty foot size then down to the height of a large dog then possibly to miniature small. Nevermore on occasion wrinkles her nose, shuts her eyes tight and puffs out smoke in representation of a sneeze(or just randomly) She also has a special defence called Windy Wing Flap and can breathe streams of orange fire that unknowingly changes to magenta-purple(but this could be a error), as mentioned in Epic Winter and seen in Dragon Games. 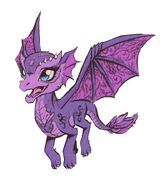 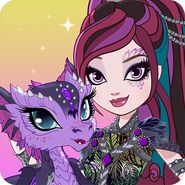 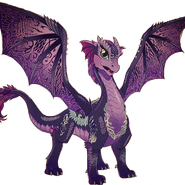 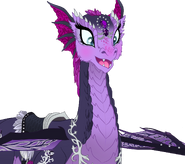 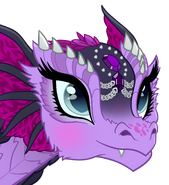