The students urge Poppy to choose a side, however Poppy turns down the offers and chooses to be a Roybel, a fuse of both Royal and Rebel.

Poppy O'Hair is a hard working, crafty, free-thinking girl and the best stylist in the whole of Ever After. She is the first character to chose both Royal and Rebel as her side, making her a Roybel. Ignoring what other people think about her (as per Duchess Swan's mocking of her not having a story in her diary), Poppy enjoys thinking for herself and not letting others tell her what to do. Poppy is a lively and adventurous person. She likes to wear scarves.

Poppy has aqua-blue eyes and short auburn hair with the right half dyed purple that is a long side section.

As each Ever After High student has their own fairytale-represented name, Holly and Poppy are both named after flowers, as Rapunzel was named for the rampion plant, and have repeating letters, corresponding to the sisters being twins. In the Victorian language of flowers, the Poppy can symbolise "Imagination." This fits with Poppy's creative flair and artistry for hair styling.

Poppy O'Hair has a younger twin sister called Holly O'Hair and the two have a close relationship. Poppy was thought to be the second daughter of Rapunzel from the fairy tale Rapunzel but Nanny Nonna, their grandmother, mixed up Poppy's and her twin sister’s birth certificates, meaning Poppy is actually the first daughter, not the second. The two sisters keep this their secret so that they both get the story they want.

Poppy is best friends with Ashlynn Ella and her twin sister Holly O'Hair.

Poppy likes Sparrow Hood but keeps it to herself and she thinks he could be less arrogant and would be cuter if he stopped singing about himself.

She has a pet monkey called Barber. In Dragon Games, she rides a dragon called Brushfire.

Poppy uses her hair as money and she adds some to her bank account everyday.

Poppy wears a large pink indie hairband on her head. She wears her favorite silver scarf which covers the top part of her shirt. Her scarf contains small accessories such as a small pink poppy on it, miniature scissors with purple chains that is held together with a safety pin. Poppy's sleeves on her shirt contain cross-stitching just like Rapunzel's, and she has a purple and pink patterned short skirt with a black belt over black/grey leggings and pink laced boots. She accessorizes with many bracelets, one dangling earring with scissors with a chain that links to the top of her ear and a scissor ring.

Poppy With her dragon Brushfire

Holly and Poppy in their Dragon Games Outfits 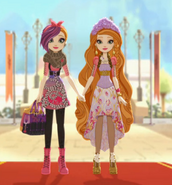 Poppy with her twin sister Holly