Rosabella is a determined and courageous girl who sticks up for what she believes, and doesn't judge people by what they look like. She openly speaks her mind, but can get easily angry and often experiences sore throats after roaring about injustices. Rosabella especially loves the beasts and says that all animals are beautiful to her.

Rosabella has brown eyes, long brown hair with red streaks and square brown glasses with red roses in the corners

Rosabella's closest friends are Cedar Wood and Cerise Hood. She is also friends with Apple White and Briar Beauty, her cousin. Darling Charming also considers Rosabella her best friend. Darling is Rosabella's roommate and they have even spent spring break together at Darling's place. Sometimes she considers Faybelle Thorn as a friend too.

Rosabella is not dating, but stated in her profile she is looking forward to her beastly prince. Daring Charming has now chosen to be that prince. Rosabella seems to have grown very fond of Daring after the events of Epic Winter. It was she who taught him the importance of being selfless. When the students were dreaming in Enchanted Sleep, Rosabella and Daring kissed when he became a human in what was her dream (according to the novel). When her skii broke on the way to Crystal's palace, Daring quickly offered to carry her the rest of the way.

In A Semi-Charming Kind Of Life , it is stated that Rosabella has a butterfly named Adelita.

Rosabella can see people for what they truly are as a coloured aura around them.

Rosabella wears a white long-sleeved floral print top with a fur collar, a gold belt with red roses on it, and a yellow skirt that has a sparkly overlay with shiny gold roses on it. She also has a headband with gold roses on it, gold chandeleir earrings, and knee high "fur" boots with a red rose in the top. 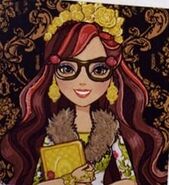