Snow White is the heroine from her generation's Snow White, and the mother of Apple White.

Snow White is competitive, goal oriented and very self confident, unquestionably considered one of the most flawless ladies in the Fairytale world. Her people look up to her as a gentle and graceful ruler.

But like the rest of us, she has her flaws and can be a cold persona. She is a suave business lady with blooming business of her own. She aims for perfection in her life and expects it from her daughter to. She cares more about the picture she gives of herself and her daughter to publicity than the truth behind it. Besides this she does show actual care for her people and her daughter.

She is tall, thin and has long, black hair with grey in it, blue eyes, and red lips.

Snow White gets along well with her daughter Apple White. She also enjoys friendly reminiscing with her old enemy The Evil Queen.

Snow White is the daughter of the Snow White from the generation before her and the mother of Apple White. It's possible that she has a sister, since the books made reference to Apple having an aunt, however it's not confirmed if it's from her mother's side or not.

She seems to have no powers but was and still is excellent dragon rider. 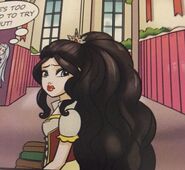 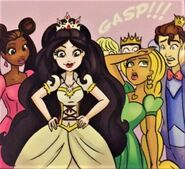 What is she doing? 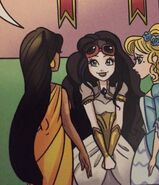 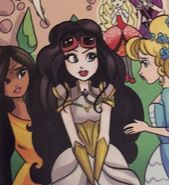 Did you lost your crown? 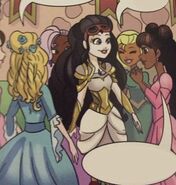