Three Little Pigs tend to be helpful students at Ever After High. They helped Headmaster Grimm on Legacy Day rehearsals by carrying a tiny manual of really useful school rules. The book is so large that it took all three of the Three Little Pigs to carry it.

The littlest pig is scared of Raven Queen and all three of them are scared of Cerise Hood, which appears odd as she is a girl but they must sense the wolf in her. The middle pig is quite sporty. He can be seen having a race with Daring Charming and Cerise Hood. The smallest pig is adventurous and impulsive in his wishes.

The tallest pig wears a school uniform and the middle pig wears a t-shirt and a baseball cap. The littlest pig is very muddy and scruffy looking. 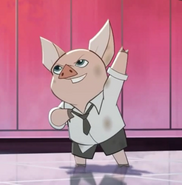 Middle Pig getting ready to relay

Littlest pig did a diabolical thing

Littlest pig attempting to be evil

Littlest pig in awe of helium

Littlest pig as a balloonatic

Maddie shouts, "Vote For Me!"
Community content is available under CC-BY-SA unless otherwise noted.
Advertisement