The White Queen, wishing to be fully called as "Mrs. Her Majesty the White Queen", is a Wonderlandian staff member of Ever After High. She replaced Professor Gold and is now the teacher of Princessology and Crownculus, she is also the advisor of the princesses. As mentioned by Briar Beauty, the White Queen was the head ruler of Wonderland as the Queen of Hearts was currently undergoing certain issues. After the events of Way Too Wonderland, it is assumed they now rule jointly again.

The White Queen is familiar with the Wonderlandian students at Ever After High as revealed in "The Beautiful Truth", and she uses Wonderlandian student references like the line, "Cheshire big, Ms. Wood!" In several of the books, she's referenced for being known to make her students imagine "six impossible things" before class starts.

Although she is sometimes quite demanding, the White Queen can be a kind and merciful woman. She is also known to stare into emptiness and ignore questions given to her for a long time. She tends to pointing out flaws in her princess students, often upsetting them.

She has platinum blond hair with white streaks done up and holds her crown on top of it. She wears white and purpleish grey multilayered dress.

She has a daughter named Chessie White. Chessie has white hair mixed with gray.

Settings are places where fairytale characters live and their stories are based. The White Queen's setting is an unusual place called Wonderland. Wonderland is the magical and madness-filled location which the life of Ever After rely on. Wonderland has a large selection of strange buildings and plants in it's many locations. It is home to all Wonderlanians. 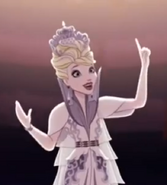