Wonderland High is the central location of Wonderland and high school of the residents from before their realm was poisoned. It is mentioned in "A Wonderlandiful World" and "Yearbook: A Hexciting Year at Ever After High". The White Queen was a faculty member there before fleeing to Ever After with the other residents lucky enough to escape. She and the students transferred to Ever After High soon after. Courtly Jester is Wonderland High's current vice-principal and school is only held one day a year.

All the children of characters of "Alice's Adventures in Wonderland" and "Through the Looking-Glass, and What Alice Found There" either were students or can be assumed to have been students. They are: 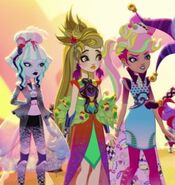